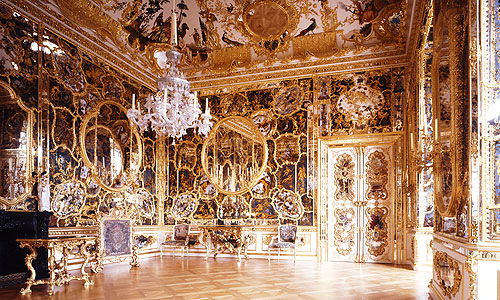 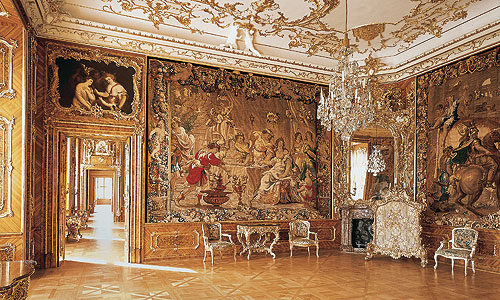 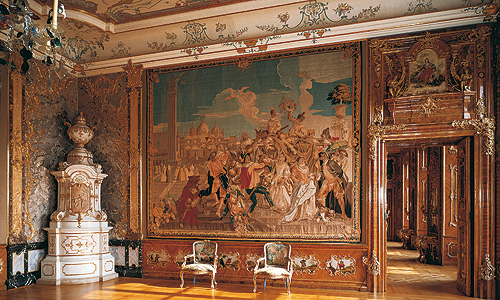 Imperial apartments, like imperial halls, are a typical feature of German baroque palaces. In addition to the ruler's own rooms, most of the residences of the electors and ecclesiastical rulers had sumptuously furnished state apartments which were used for occasional visits by the emperor and other high-ranking guests. In Würzburg these apartments were especially important, as emperors regularly stayed in this bishop's city on their journey to and from Frankfurt am Main for the coronation ceremony.

The Imperial Apartments of the Würzburg Residence north and south of the Imperial Hall form a single magnificent suite 160 metres in length. The Southern Imperial Apartments were decorated and furnished from 1740 to 1744 under Prince-Bishop Friedrich Carl von Schönborn. The highlights are the Venetian Room with its numerous small original paintings and the paintings incorporated into the mirrors of the reconstructed Mirror Cabinet.

The wall decoration of the Mirror Cabinet, completed between 1740 and 1745 and the most precious interior created in the Würzburg Residence under Prince-Bishop Friedrich Carl von Schönborn, was completely destroyed in the bombing raids of 1945. Based on a preserved mirror fragment, numerous photographs and a watercolour by Georg Dehn (c. 1870/73), the entire room shell was however recreated between 1979 and 1987, using the old techniques.

back to the Imperial Hall

further on to the memorial room