It was not until the beginning of the 19th century that the Court Garden was extended to include the lower-lying area of the kitchen garden. This area had previously belonged to the neighbouring St Afra Monastery. Until 1969 the kitchen garden still had its original grid of paths and vegetable beds, but these were then replaced by a simple lawn.

Between 1998 and 2001, however, the kitchen garden was reconstructed. Since then the gardeners have once again been cultivating the topiary fruit trees (apple trees with a bowl-shaped crown and pear trees with a conical crown) which dominated the whole garden under the court gardener Johann Prokop Mayer towards the end of the 18th century and far beyond. 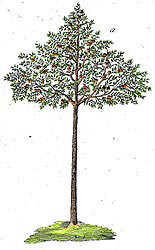 Topiary fruit tree with
a long trunk and a conical crown 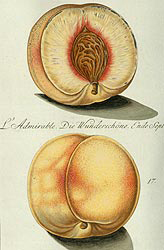 Towards the end of the 18th century, there were several hundred artistically clipped fruit trees in the gardens of the Residence. The espalier fruit trees on the terrace walls of the East Garden continued to be replaced well into the first half of the 20th century, but were then however abandoned.