Interior of the Ingelheim Rooms completed 1781

The episcopal principality of Würzburg was abolished with secularization. After an eight-year interregnum by Grand Duke Ferdinand of Tuscany (reigned 1806-1814) in 1814 Würzburg became part of the kingdom of Bavaria.

The wrought-iron gates across the cour d'honneur, which had effectively separated this inner area from the large Residence Square, were demolished in 1821. In their place today is the Franconia Fountain created by Ferdinand von Miller the Younger. This was unveiled in 1894 as a tribute by the city of Würzburg and the whole of Franconia to Prince Regent Luitpold, who was born in 1821 in the Würzburg Residence. 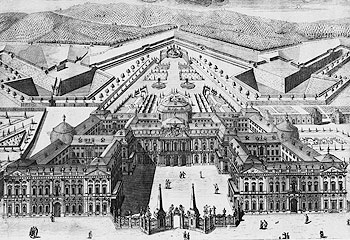 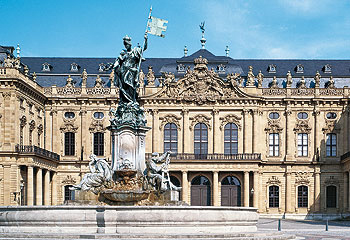 Façade of the Residence with Franconia Fountain

The Würzburg Residence as a museum