This room contains an exhibition by the Bavarian Administration of Palaces, Gardens and Lakes in remembrance of the destruction of the Würzburg Residence in the Second World War. 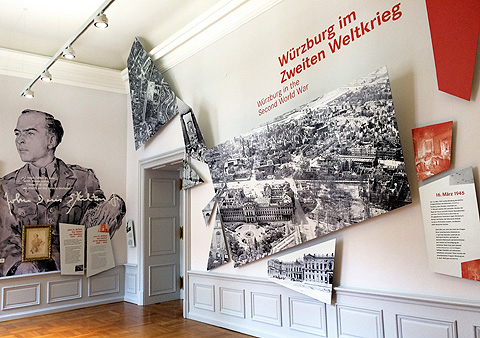 On 16 March 1945, Würzburg and the Residence suffered a catastrophe. Around 5,000 people died in the air attack with explosive and incendiary bombs by the British Royal Air Force. The old part of the town was almost completely destroyed. Together with the town, almost all the roofs, wooden ceilings and floors of the Residence burned out. Only the vaulted rooms, including the large halls in the central block, survived the inferno relatively unharmed. This small display is intended to give an idea of the destruction, and relies entirely on the power of the pictures – with little text but unforgettable scenes of the ruined town and the burnt-out Residence. Contemporary documents such as the despairing report of the Residence caretaker give a more detailed picture of the hardship at this time.

The American art protection officer John Davis Skilton is specially honoured with a watercolour portrait and personal testimonies. Lieutenant Skilton came to Würzburg on 18 June 1945, only three months after the devastating bombardment. He found a completely destroyed old town and a Residence without roofs. As an art historian and employee of the National Gallery of Art in Washington, Skilton was aware of the importance of the magnificent prince-bishop’s Residence and its unique interiors and immediately took steps to save it. He had the vault provisionally covered and thus preserved Tiepolo’s frescoes, the stucco-work of Antonio Bossi and Balthasar Neumann’s staircase hall, which are today a UNESCO World Heritage Site, from certain destruction through exposure to damp.

back to the Southern Imperial Apartements

further on to the documentation room