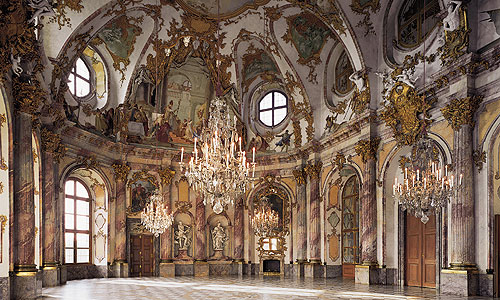 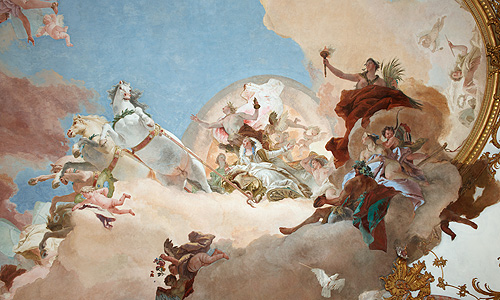 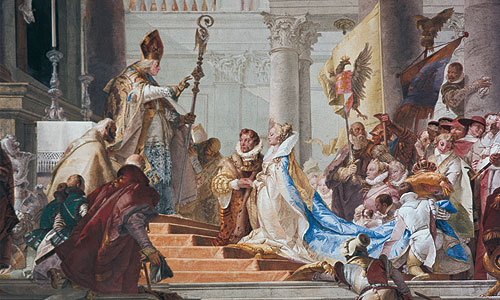 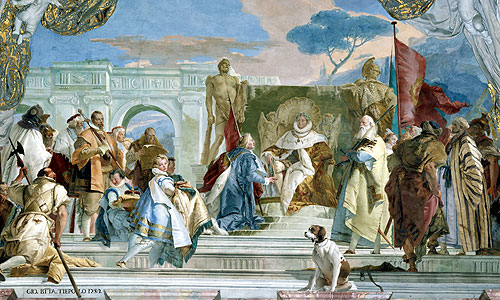 The Imperial Hall is the culmination of the magnificent sequence of rooms consisting of the vestibule, Garden Hall, staircase and White Hall. At the hands of the architect, Balthasar Neumann, this hall, with its twenty, almost 9-metre high half columns in reddish stucco-work marble and large oval dome, was transformed into the most splendid and imposing room in the Würzburg Residence.

The Imperial Hall, the shell of which had already been completed in 1741, was only decorated and furnished in 1749-1753 under Prince-Bishop Carl Philipp von Greiffenclau. The three ceiling frescos by Giovanni Battista Tiepolo, produced in 1751/52, are a splendid depiction of the political history of the episcopal principality of Würzburg in the context of the Empire at the time of Emperor Friedrich Barbarossa. The sopraportas (= paintings over the doors) are by Tiepolo's son Giovanni Domenico and show scenes from the lives of emperors of the ancient world. Antonio Bossi created the four life-size stucco figures of Neptune, Juno, Flora and Apollo in the wall niches on the short sides of the hall.

back to the White Hall

further on to the Southern Imperial Apartments